Exoskeletons for All - Women Exosuits by HeroWear

Can exoskeletons be the future of physical labor? Are women’s personal features taken into consideration, when creating unisex exosuits? Karl Zelik & Matt Marino from HeroWear met with us to tackle these questions and talk about exo suits for women in the construction industry.

Exoskeletons are one of the hot topics when we speak of the digitalization of the construction industry. The 2018 Q4 Commercial Construction Index noted that 23% of contractors believe they will adopt wearable technology onsite in the next 3 years. Considering the state of things caused by the Coronavirus pandemic, and the push on the industry to get their processes digitized, “Suiting up” is not a bad idea! We have looked upon the pro’s and con’s of using Exo suits in a construction company, and today we want to share with you some insight from an interview with a company that has launched the first exosuit with a version designed specifically for women in construction: HeroWear.

HeroWear and the super suits

The HeroWear team started up as a small team of scientists at Vanderbilt University. These forward thinkers wanted to use science in order to help people. I had a chance to sit down and talk with both Karl Zelik (Assistant Professor at Vanderbilt University, Co-Founder & Chief Scientific Officer) and Matt Marino (Director of Ergonomics & Human Factors). When asked what it is that they are building, their answer was immediate: “Simply put, we build supersuits!”

The creative idea came from Karl Zelik (at the time being an engineering professor and biomechanics researcher at Vanderbilt University). As he loves pointing it out; “I blame my kids. Back around 2016, I started noticing more back pain as a result of all the lifting, hauling, and leaning that goes along with parenting.” This is how his children made him think of a product to prevent the back pain, the muscular-skeletal loading. Something that would be low profile, lightweight, and easy to wear. Thus, his research for the best way to create a back-assisting exosuit culminated as the company HeroWear was created in 2019.

Matt Marino joined in November 2019 as the first hire after the cofounders. His back-track includes industrial on-site rehabilitation (industrial PT) and he has worked in ergonomics for over 13 years! Over the last 5 years, he has specialized in studying “Wearable tech” in diverse industries. Matt has been an active member of the ASTM F48 Committee on Exoskeletons since its 2017 inception, and he is a founding partner of the ASTM Exo Technology Center of Excellence. As he also points out, he has tested dozens of exoskeletons from around the world and he wore all of them himself in order to get a good understanding of what they can do well (or not).

Just like Karl Zelik, the reason behind him joining HeroWear and developing this amazing one-of-a-kind suit, was his family. In 2011 his first child, his son, was born with cerebral palsy. This made Matt research even harder on ways in which he could improve his son's life, and lift the weight from his wife. Thus, in late 2019, HeroWear developed the first soft exosuit with the ability to engage or disengage assistance on-demand, including a version specially designed for female workers! Having in mind the women of construction, manufacturing, and logistics, the team focused on a solution for them that would not be as cumbersome as the bulky, chest-platter exoskeletons on the market.

Karl Zelik’s first years on developing the product were based on actual research, and constantly asking questions. “How can Exo suits maintain a full range of motions and agility and yet be helpful in providing protection against back injuries?” Through science, they developed the product that could have a real impact on people’s lives. Talking to both women and men he realized that there are comfort issues - the exoskeletons on the market being too heavy/bulky. He decided to solve that issue.

The First Exosuit for Women

“According to reports in Time, Forbes, and The Wall Street Journal, women now make up 50.4 percent of workers. Studies show that statistically speaking, they’re at least as likely if not more likely to be at risk for injury.” says Matt Marino.

The team looked at bringing something to the market that could fit all body types; the ultimate goal being an inclusive design practice where the exosuit built would be worn by both men and women.

Ast Matt Marino points out, women face struggles in fitting int to unisex exoskeletons. The truth is that most devices on the market are called ‘’unisex’’, yet they are designed for men and not taking into account their use by women. Most exoskeletons are bulky and have breastplates that are extremely uncomfortable for women. Besides that, there was a great pressure on the sensitive parts of their bodies, and they were uncomfortable to wear.

There was a great need for an Exo specifically designed for women in construction. The HeroWear team took it as a challenge and a new possibility, so they analized how women are shaped, and the ergonomics behind it - they wanted to create something that both men and women could wear underneath their clothes but offered them the support they needed.

By March 2020 HeroWear brought to the world The Apex suit - a back-assist exosuit that reduces strain on the back without getting in the way. It uses a proprietary mechanism that sits in a band around the back of the wearer, who can activate the suit's assistance when it's needed. HeroWear says its exosuit will take 50 pounds (23 kilograms) of the strain off your back each time you lift an object. For tasks requiring leaning and lifting , it can reduce muscle activity in the lower back by anywhere from 15% to 45%. Unlike many other exoskeletons that have heavy metal parts and can weigh up to 150 pounds, this one is light. It weighs just 3.4 pounds (1.6 kilograms) and is made of a variety of fabrics, including nylon, lycra, and mesh.

“The Design Philosophy behind it was to create something that would become invisible on the body; not get into the way when they don’t need the assistance” - states Matt Marino. With 8 out of 10 people on the planet experiencing back-pains, prevention is key! Current clients of HeroWear Apex are worldwide, and work in

The exosuits are fitted to each person’s unique measurements - body size, weight and build and the feedback is extremely positive. As Matt Marino points out, “At our construction clients, there are individuals that are already struggling with back issues and the Apex helps them; they were happy of how versatile the exosuit can be (awkward positions, prolonged static bending); they don’t have to take it off; they can climb in it while wearing fall protection; they've so far used it for flooring, framing, concrete, landscape and roof work.”

The future of Exo suits

“We are in this business to help people out. We are here for the workers, with feedback from workers. We are not interested in designing something that would not be used!” Matt says.

To prevent health and safety risks construction workers should use exoskeletons daily, for the tasks they are performing. That’s where the HeroWear idea was born - bending over, lifting, carrying bags of concrete, moving construction materials, pulling up an old porch, roofing activities, lifting of heavy objects, bending over actions, and more can be done now easier and smoother with the help of the exosuit.

Through extensive research with the workers themselves, they learned a lot: where workers need help, where the product can improve, and in what way. Karl believes that fast-forwarding into the future, this type of Exo suit will become part of our regular wardrobe, helping us to realize the real risk of being injured. “It doesn’t matter what name they want to give it - smart clothing, mechanized clothing, Exo suits - they will just call it clothing in 20-30 years”. He sets the parallel between exo suits and clothing by comparing it with the smartphone revolution a decade ago - people would call the mobile phones that were high tech as smartphones when right now we just call them regularly: phones.

The HeroWear team is currently ramping up the supply chain and the manufacturing devices, as they have a very high demand for the Exo suits but a limited supply. It is obvious that the market is ready and willing to use the new generation of Exo suits. Karl Zelik takes pride in what his team has created: “Technology that improves lives. This is the future: technology integrated into clothing, into what people wear every day”.

Exoskeletons and the Construction Industry

It’s estimated that global exoskeleton market will be worth 8,300.00 Million USD by 2025. The wave of digitalisation is finally catching up with the construction industry, especially because of the Coronavirus pandemic, yet the statistics still show it as one of the least modern industries. With shortages in staff and the introduction of new automated solutions - like the cloud-based construction management software - there is an increasing pressure to do more with fewer resources. Would this be the perfect moment for more construction and manufacturing companies to adopt such futuristic solutions, like the HeroWear Exo suit?

It is said that ¼ of the construction workforce is expected to retire between 2018 and 2027 - this will create a demand for 42,000 workers, in the UK alone, by 2027. There are not many companies that made the leap of faith, but Freshco.ca (a company that builds and remodels retail spaces in CA and the eastern US) is one of them. They bought 2 exosuits and the founder of the company, Mandy Rennehan, states that: "This is something that's a game-changer” - allowing the company to use them for 40% of the most fatiguing jobs. Rennehan said it could take a team of three people up to four days to chip away tiles in a washroom at a retail store. With the help of exosuits, two people can do the same work in two days with 90 % less fatigue.

The UK road workers have started out using the Exopush skeleton - developed for Colas in France by Auxerre-based RB3D. The exoskeleton was bought to give power assistance to the road workers working on leveling with a rake. The aim: making operatives more productive and having them less prone to musculoskeletal injuries. The kit can push/pull up to 50 kg and reduces repetition movement up to fivefold for the user, Colas says.

When looking at the digitalization of the industry, making sure that the companies pick a right fit construction software solution is one thing, but with tools like exoskeletons or exosuits like the ones that HeroWear produces, the employees would be able to feel the change on their own skin, and on the way they work. Work injuries compromise an employee’s health and in turn their productivity. They affect the expenses your company has and if the final product is finished on time, and delivered to your clients. As HeroWear also points out, your workers deserve a device that reduces the risk of injury and improves their performance. Now they can actually have it! 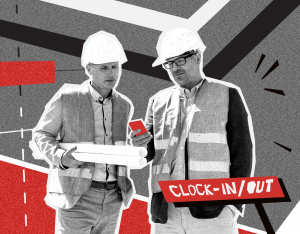 Timesheet Managment easier than ever before! 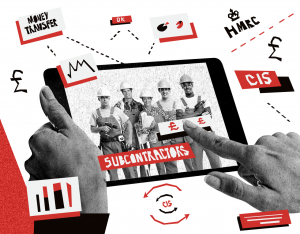 How can Archdesk help you with CIS? 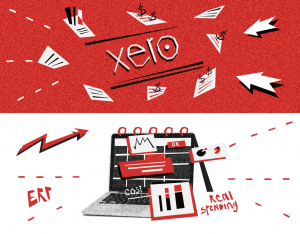 How Archdesk Integrates Seamlessly with Xero

The Future of Construction. Robotic Swarms and Humanoid Workers